Link to the performance

Link to the performance 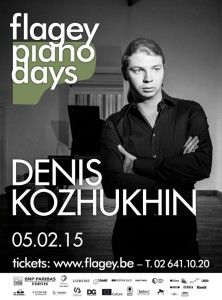 Denis Kozhukhin will be ‘guest of honour’ at this year’s Flagey Piano Days Festival, in Brussels, Belgium. As part of this role, he will give a recital on the 5th of February featuring works by Haydn, Schubert, Brahms, Rachmaninov and Prokofiev, which will be broadcast live on Musiq’3, as well as conducting a masterclass. Denis will also perform Brahms Piano Concerto No. 2 with the Orchestre Philharmonique Royal de Liège under the baton of Fayçal Karoui, which will be part of the Festival’s closing concert also broadcast live.

“When they ask me to do a master class, I never say no. Because when I was a student, I myself learned a great deal from these classes, from a range of teachers and musicians. They never involve big ideas, I consider the teachings of a master class to be more like a seed that you plant, something that you will continue to reflect on.”